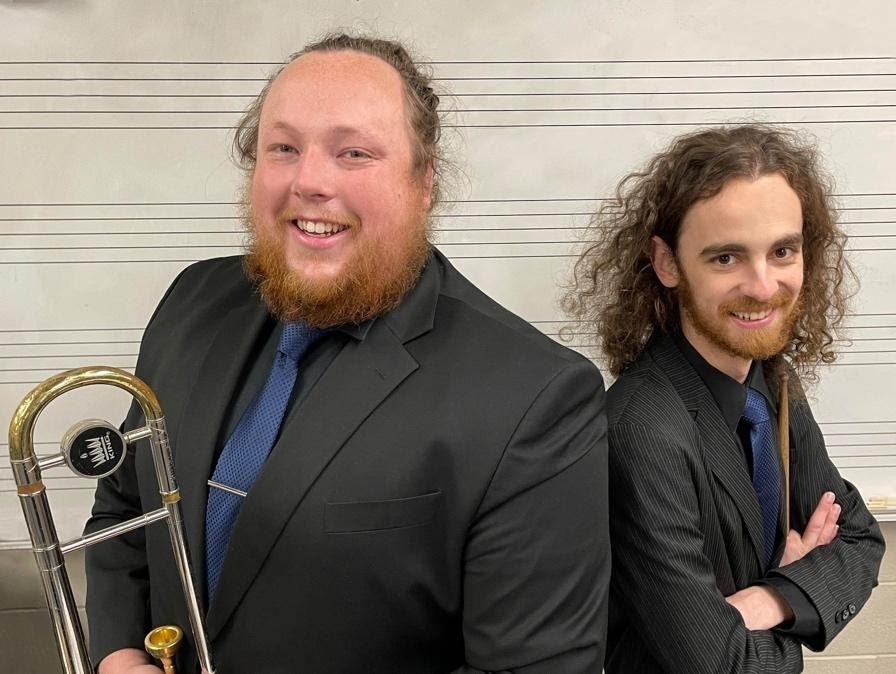 Who are the Maestros of Hemlock?
District
Tuesday, March 09, 2021

The question on everyone’s minds these days, who are the Maestros of Hemlock? The school district has been working on developing a cohesive K-12 music program. The goal is to allow students the opportunity to learn and grow with music starting with young fives/Kindergarten until graduation. Research shows that beyond the intrinsic value of music to cultures worldwide, education in music has benefits for young people that transcend the musical domain. The Arts Education Partnership (AEP) reviewed an extensive body of research to identify high-quality, evidence-based studies that document student learning outcomes associated with an education in and through music. The results show conclusively that music education equips students with the foundational abilities to learn, to achieve in other core academic subjects, and to develop the capacities, skills, and knowledge essential for lifelong success (Arts Education Partnership, 2011).

Hemlock Public School District is committed to providing the absolute best opportunities possible to our students. We have worked over the last few years to grow programming in the areas of music and STEAM offerings as well as physical education at our elementary school buildings. Recently, the music program has been retooled with the promotion of long-time band director Joshua Chase to the position of the middle school principal, which led way to the hiring of Charles Bicigo. Later we had the addition of Quin Cramer at the semester to head up music at the elementary level as well as team teaching at the middle school. There are plans to continue to grow and improve the program as the “Maestros of Hemlock” work together to implement a dynamic, comprehensive music program.

Charles Bicigo is a familiar face as he student taught with HPS in 2017 after which he was hired by Owen-Gage school district before returning to Hemlock Public School District to replace his mentor Josh Chase. Bicigo is a 2011 graduate of Freeland HS where he was a member of the band and a lettered in three sports (Football, Wrestling, and Baseball).  He was also involved in NHS and Boy Scouts where he earned the rank of Eagle Scout. After high school, he attended Saginaw Valley State University where he originally majored in engineering before realizing his dream and passion was music. Director Bicigo’s vision for the band program in three years is to hopefully be at or nearing 90 kids in the HS Band, attending SVSU band day, marching in multiple parades, possibly marching band showcases, a Jazz Band at 18-25 people, and touring nursing homes, starting to work on an auditorium/theater that will allow for large concerts, theater productions with a full student pit band, etc.  Getting an instrument repair class/club started would also be nice. In five years, we hope to be over 100 kids in the high school band, possibly moving to two HS groups, and a middle school jazz band fully established.  Marching camp set up as a go-away experience covering a full week, allowing for more focused rehearsals and more fun and bonding time. Also, marching showcases, and hopefully starting to get into competitions with more traveling experiences, such as CMU or MSU band day added.  Large band trip for the HS that includes playing experiences for the band, at least once every 4 years so each student goes on one large trip.

Middle School Principal Joshua Chase said “We are very fortunate to have Mr. Bicigo and Mr. Cramer on our team!  Their energy and work ethic are contagious and very fun to see.  The Maestro’s are doing a great job and I can hear the improvements daily.  I cannot wait to see the heights in which they take the program!”

Quin Cramer comes to us by way of Saginaw Valley State University.  He student taught at Frankenmuth Public Schools with the secondary instrumental music department.  Mr. Cramer was a 2014 graduate of Fremont High School.  He is a percussionist although he started early in his career as a French horn player.  Mr. Cramer was very involved at Fremont HS where he was involved with soccer, swimming, and theatre.  Mr. Cramer’s goal for the music program is to provide students a fun opportunity to explore music in the school setting. Given the inconsistent nature of the musical education program at the elementary level here at Hemlock, the main goal for the next five years is to develop a consistent curriculum that supports the secondary music program. The elementary music program will equip students to take part in musical exploration outside the classroom. An additional goal would be to develop a program that encourages more music-making as a family both in and outside of the home. Thankfully, working closely with Mr. Bicigo allows Mr. Cramer to ensure that there is a smooth transition between the elementary and secondary music programs so that Hemlock students experience the maximum amount of musical success.

Superintendent Don Killingbeck said, “This is just another example of the district’s commitment to students, the fine arts, and fostering an environment for children to thrive in.”