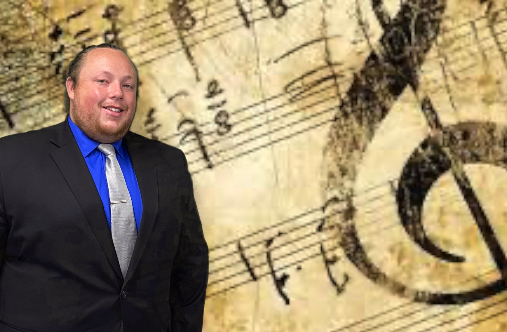 Hemlock Public School District is pleased to announce that Charles Bicigo has been selected as the new Hemlock High and Middle School Band Director after the Board of Education approved his hiring for the 2020-21 school year at their July 20, 2020 meeting.

Charles is an accomplished trombone player; he served as a section leader to the SVSU marching band, and was principal trombone in the Wind Ensemble there, as well as lead trombone for the Jazz Ensemble.  He is also a skilled arranger, and arranges music for schools around the area, including SVSU, Waterford-Mott Marching Band, and St. Charles High School.  Charles continues to work as brass caption-head for multiple schools at their marching camps, working to improve students marching technique as well as their musical abilities while adding new tools to his own teaching tool-box.

Former Band Director and current Middle School Principal, Mr. Chase said, "I am excited and uplifted to be handing over the program to such an accomplished educator.  Mr. Bicigo has demonstrated fantastic musicianship, leadership, and an unbelievable ability to gain a rapport with students."

Charles Bicigo will be a familiar face to many of our parents, students, and community

members, as he spent a semester with our band program as a student teacher in the spring of 2017.  Mr. Bicigo comes to us from Owendale-Gagetown Area Schools, where he taught grades 5-12 Band, grades 2-5 General Music, as well as Jazz Ensemble.  He has worked to build their program, adding new experiences like a trip to SVSU Band Day, Jazz Ensemble, and technology-based instruction.  He used his experience with small school/big spirit mentality to get the students invested in the group, and saw many returns from the kids, as well as from the community.

Superintendent Killingbeck, himself a band parent noted that Mr. Bicigo familiarity with the district, resume, and his ability to connect with students makes him a natural choice to replace beloved Band Director Josh Chase.

New Hemlock Band Director, Charles Bicigo said,  “I couldn’t be more excited by the opportunity I have been given here to serve the community of Hemlock.  These are great kids in a fantastic program, and my biggest goal is to continue building the program.  Hemlock puts a great deal of pride into their bands, and I plan on keeping that tradition alive for many years to come.”

After getting settled into his position, Mr. Bicigo plans on focusing on creating a smooth transition for the students.  “With all of the uncertainty going on right now, I plan on trying to keep band fun and engaging, in whatever way the current guidelines allow.  The worst thing I could do would be to come in and change a million things right away; the plan is to get an idea of the directions the students want to go, and only make changes that will be in line with that vision.  The program is already running at an extremely high level, so it should be easy to accomplish what we want to.”

For more information about this or other positive happenings at Hemlock Public School District, please call (989) 642-5282 or visit us on the web at www.hemlockps.com.