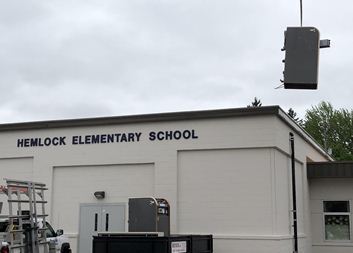 Recently, a boiler or two were flying high over Hemlock Elementary School. The district has partnered with Schneider Electric to move forward with projects that generate energy savings to pay for themselves. The boiler project was completed by a local vendor, Remer Plumbing, Heating, and Air Conditioning. The entire scope of the work is a little more than 1.5 million dollars and addresses some of the district's most immediate needs or areas that generate the most savings.

Board Trustee David Messing said, “I am extremely proud of Superintendent Killingbeck with his ability to think outside the box.  Our district faces some challenges, and his innovating thinking will help our district reach some of those goals.  Utilizing future savings to pay for much-needed projects was a brilliant way to free up capital.”

Energy savings are amortized and guaranteed based on an analysis of the districts consumption. Over the next twenty years, the district was projected to spend approximately 5 million dollars on energy, and with these projects, this has been reduced to roughly 3 million dollars. The savings have been captured to pay for the work being completed.

Superintendent Killingbeck said, “This is about student, parent, staff, and community experience. We want our facility to be comfortable, presented well, and ready for teachers to teach and student to learn.”

Although the district has addressed some of the most immediate needs through this energy project, there are several items that the district will still need to address sometime shortly. Things like rooftop units at K.C. Ling, original windows at the high school along the courtyard, aging bus fleet, and aging roofs, to name a few.